Our extrafine single pigment watercolor Genuine Vivianite is prepared with pure mineral Genuine Vivianite pigment, chemically an iron phosphate. It can be found in nature in a crystalline or in a earthy form. In this latter form it is also called “blue ochre” and is located near iron deposits, but curiously, it can also be formed in the presence of organic discharges (sewage), by reaction between phosphoric acid compounds present in excreta and the iron of the ducts or in waters. Use as pigment dates to centuries back in the areas where it could be found: for example in Roman paintings in Germany.

Genuine Vivianite watercolor by Nila Colori, prepared with this pure pigment, has important granulation, is very lightfast, semi-transparent and has a moderate tinting strength.

Genuine Vivianite pigment is milled with just the right amount of a mixture of Kordofan gum arabic (binder) and vegetable glycerin (humectant and plasticyzer). These are the ingredients which are historically the main characters in the production of the watercolors and which give the best results regarding ease and pleasantness of painting. We don’t add any filler or any other organic compound, which might alter the color over time. 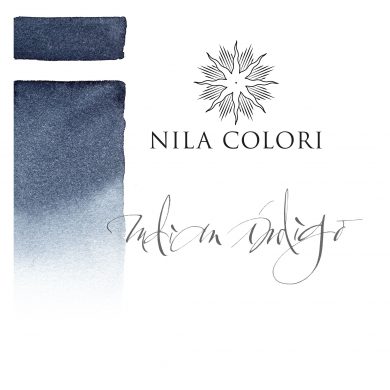