Our extrafine single pigment Genuine Egyptian Blue watercolor is prepared with Genuine Egyptian Blue inorganic mineral pigment, chemically copper and carbonate silicate. This is the earliest synthetic pigment known: it was already produced during the IIIrd millennium a.C in Egypt. It production and use in art continued for centuries: in Egypt until the Ptolemaic period, in Minoan art, in Mesopotamia, in Greek civilization. Thanks to the Roman it spread from Pompeii to England and medioeval artists used it in fresco technique.

To produce it, the following raw matters were mixed: sand, limestone, a copper mineral (usually malachite) and soda (sodium carbonate): the mixture was cooked at about 900°C for many hours. The resulting mass was ground and washed. In nature a mineral with the same composition does exist: cuprorivaite.

Genuine Egyptian Blue pigment is milled with just the right amount of a mixture of Kordofan gum arabic (binder) and vegetable glycerin (humectant and plasticyzer). These are the ingredients which are historically the main characters in the production of the watercolors and which give the best results regarding ease and pleasantness of painting. We don’t add any filler or any other organic compound, which might alter the color over time. 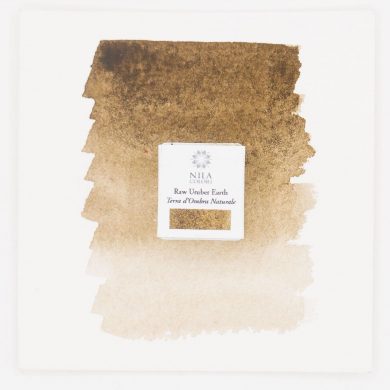