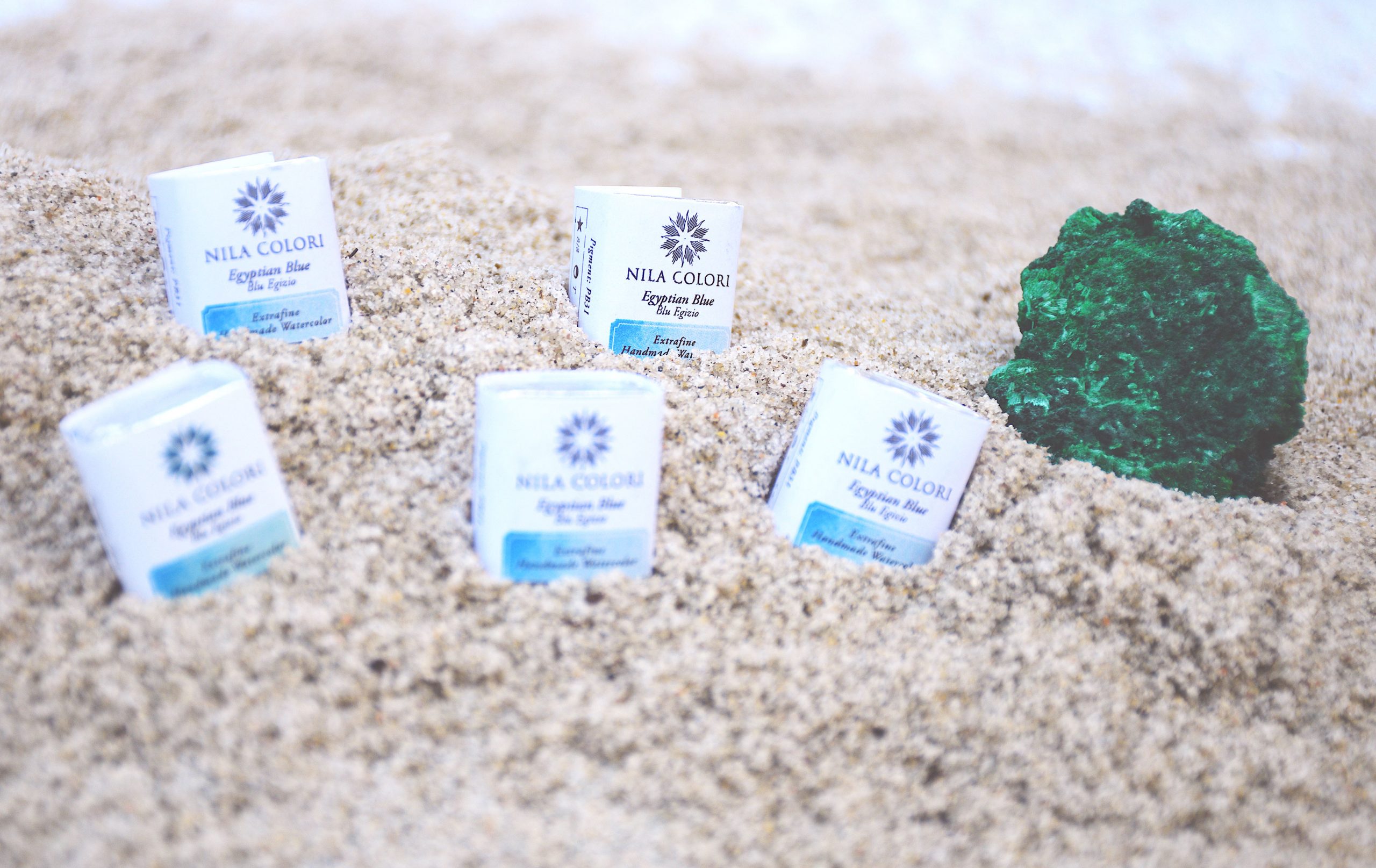 Recipes, curiosities, and uses of the ancient blue color 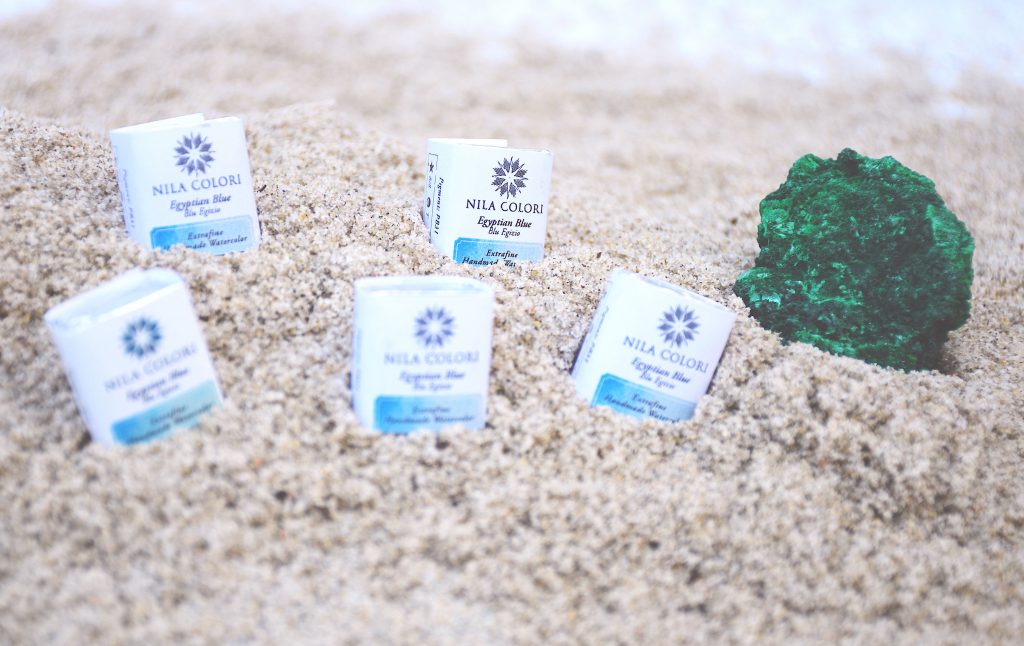 When we think about a synthetic pigment, produced in the laboratory, we imagine a technician with a coat, gloves, and glasses behind a bench full of test tubes and ampoules intent on his or her work.

The chemical industry has truly revolutionized the world of pigments by allowing the creation of new colors and making them affordable to everyone.

What was the first synthetic pigment?

In the past, pigments were generally obtained by grinding natural raw materials in a process that we can define as mechanical. The blue color, in particular, was very difficult to achieve. Since it is one of the primary colors it cannot be prepared by mixing other colors, and blue minerals for use as raw materials were not readily available.

Around 3100 B.C., and perhaps even earlier, the Egyptians strove to prepare blue pigment, the so-called “Egyptian frit” or Egyptian Blue, with what they had available.

Known by different names such as Blu Pompeiano, Blu di Pozzuoli, Blu d’Alessandria, Egyptian Blue was used primarily until the Roman period when it fell into disuse and was used more rarely. E. Raehlmann (1913/1914), who had investigated it on Egyptian and Roman objects, wrote

The latest place, where I found the old blue frit, when examining the blue and green areas of the walls, was the chorus of the old Basilica Santa Maria antiqua on the Forum Romanum, dating from the fifth and sixth century B.C. and dedicated to the Greek religion. 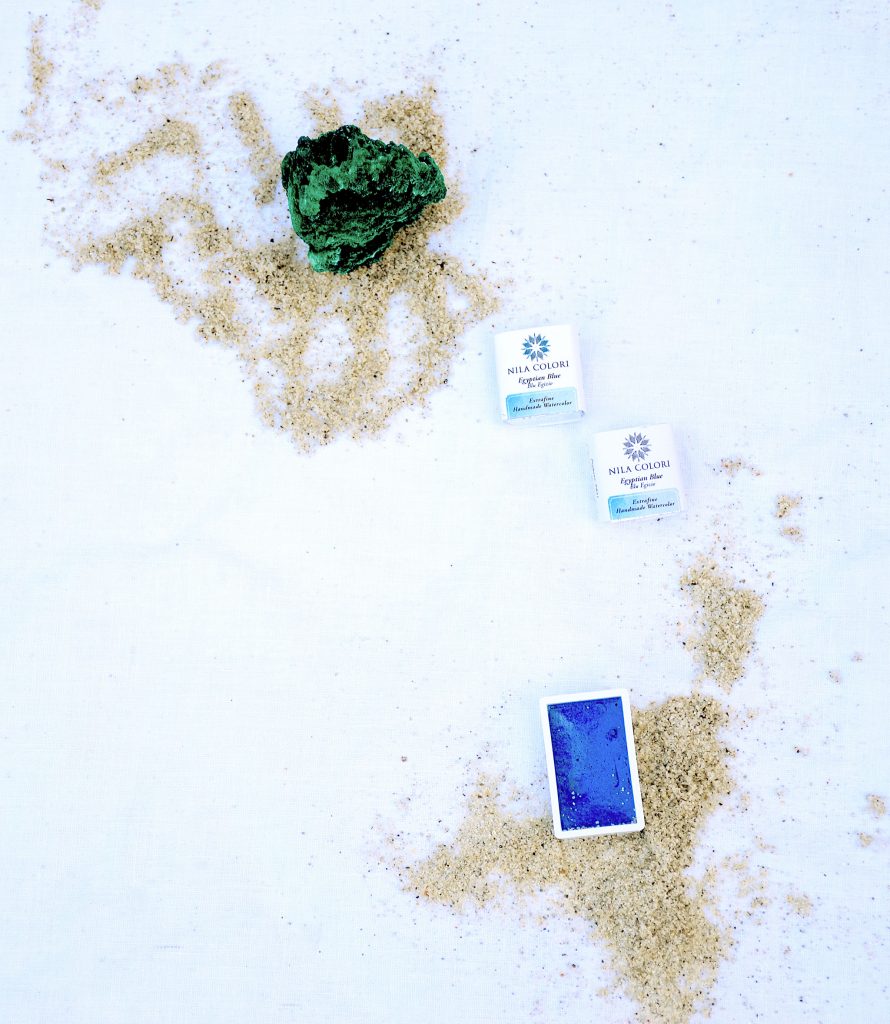 It often happens that the best or most innovative products are the result of errors or chance. This is not the case here: Egyptian Blue is the result of the careful combining of ingredients and a conscious procedure conducted with precision and care.

Chemically it is a double silicate of copper and calcium with the chemical formula CaO · CuO · 4SiO2. To obtain it, the Egyptians mixed one part lime (calcium oxide, CaO) and one part copper oxide (CuO) with four parts quartz (silica, SiO2). The raw materials of these components are all minerals: chalk or limestone for calcium oxide, a copper mineral such as malachite for copper oxide, and sand for quartz. Natron was then added to these ingredients, that is a mixture of salts composed mainly of sodium carbonates and bicarbonates, which is formed in nature by evaporation of water rich in sodium. Natron was useful because it was used as a “flux” and allowed to lower the melting point of the silica that makes up the sand from about 1700 °C to about 800-900 °C. All the raw materials were then heated in a furnace.

Each ingredient plays its part

Vitruvius, a Roman architect and writer, in the first century B.C. saw the blue pigment while visiting a glass factory in Pozzuoli, near Naples. Why exactly in a glass factory? Because silica is the main component of glass. In his writings he talks about how the pigment was formed following the firing in the furnace “due to the vehement heat” of small pellets made of copper, natron, and sand, previously ground and moistened. Copper was added directly as metal filings or malachite was used while, unlike the Egyptian recipe, calcium oxide was not indicated.

Trying the recipe described by Vitruvius, however, scholars managed to obtain a green and not a blue pigment, so-called “green frit.” In fact, the author did not know that the sand used by his contemporaries was that of the Volturno River and contained, in addition to silica, a certain amount of calcite for the calcium oxide part. Each ingredient, therefore, is essential to obtain the desired product.

The color of Egyptian Blue can vary from a darker blue to a lighter one depending on the size of the particles it is made up of: smaller grains give a lighter color and larger grains a darker color. One of the first examples of the use of Egyptian Blue as a pigment dates back to the Fourth Dynasty (2613-2494 B.C.) and we find it on a sarcophagus kept in the Egyptian Museum in Cairo. From the Fifth Dynasty (2494-2345 B.C.), it was used to color various objects and, as a pigment, employed both for frescoes and to decorate statues and wooden supports.

Egyptian Blue, with Maya Blue and Ultramarine Blue, has tinged distant centuries with blue; the pigment carefully prepared by hand with the help of chemistry; the first pigment obtained by knowingly mixing the necessary ingredients in the right proportions.