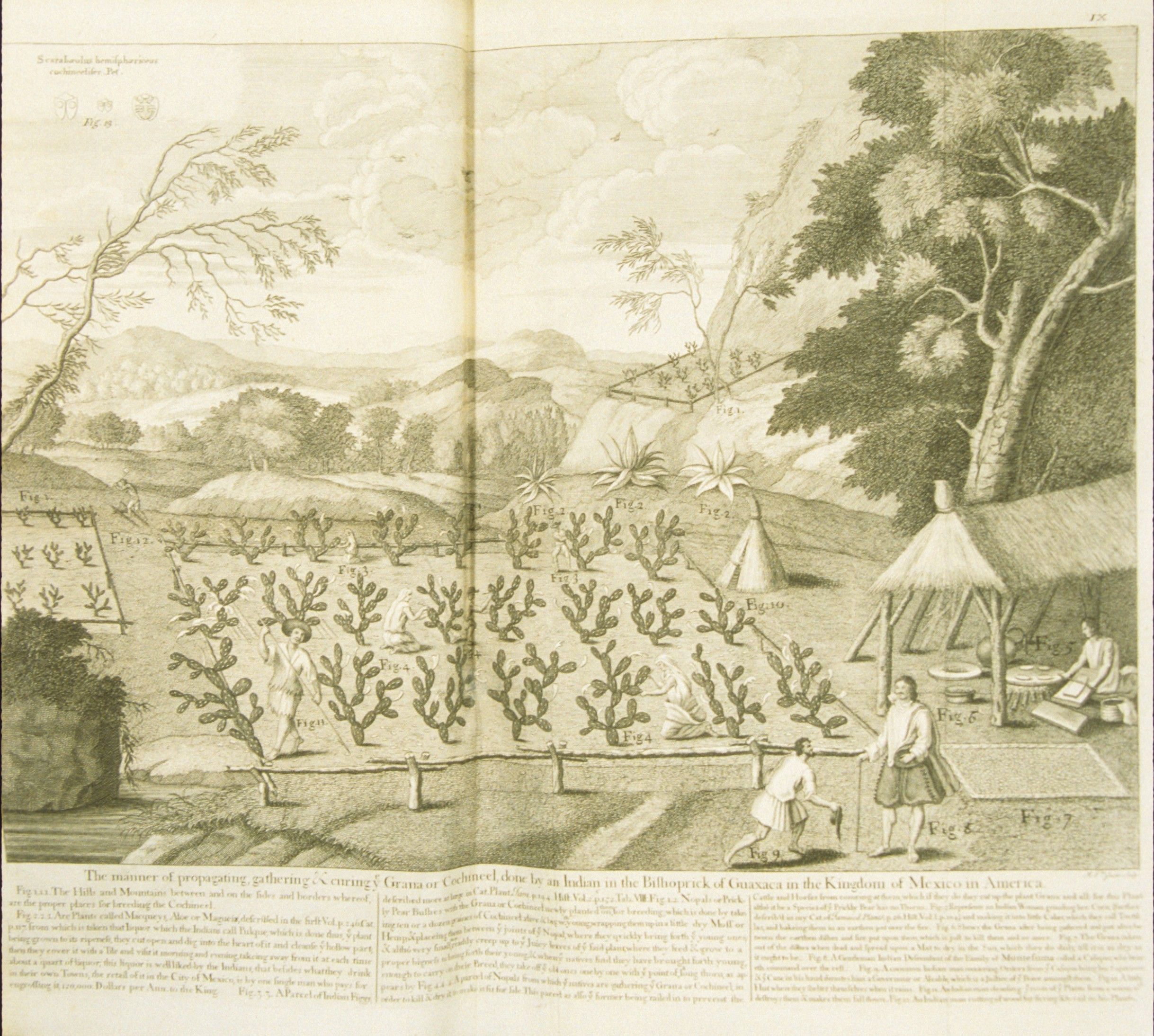 Cochineal, the red color landed in Europe from Mexico

Specifically, the red color was intense and vibrating in its carmine shade

Looking around and ending up surrounded by colors with our gaze attracted by different shades and attractive dyes which keep challenging us. It is probably how Hernán Cortés felt when he wrote his letter to king Charles V:

“I shall speak of some of the things I have seen, which although badly described, I know very well will cause such wonder that they will hardly be believed, because even we who see them here with our own eyes are unable to comprehend their reality. They also sell skeins of different kinds of spun cotton in all colours, so that it seems quite like one of the silk markets of Granada, although it is on a greater scale; also as many different colours for painters as can be found in Spain and of as excellent hues.”

Specifically, the red color was intense and vibrating in its carmine shade.

What was it about? How was Carmine color made?

Carmine word most probably derives from the medieval Latin carminium, that, in turn, derives from the Arabic word qirmizī “scarlet” and minium “minium”, referring to the red color traditionally used for miniatures’ initials.

Hernán Cortés and the conquistadores’ eyes were delighted by red carmine obtained from cochineal, the female of a scale phytophagous insect, that is a plant parasite containing carminic acid as colouring principle. Dactylopius coccus, scientific name of the insect, is typical of Mexico, Central and Southern America regions and it’s mainly found on cacti genus Opuntia, the same genus of prickly pears, and on cacti genus Nopalea.

In 1817, in his work “Principles of physics and chemistry behind the most recent findings”, Georg Adolf Suckow discusses two types of cochineal which were used to produce carmine red: grana silvestra and grana fina, also called mesteque from the name of a Mexican province. Unlike this latter one, grana silvestra is less expensive because it contains less coloring principle. However, as professor Suckow highlights, “the finest cochineal (mesteque) has to be always used to prepare carmine”.

One of the recipes to prepare carmine red

In the work of 1817 that we just talked about, it is also shown the recipe of carmine used in painting.

Let boil in a tin pot one ounce of powdered cochineal with one and a half measures of pure water and then add two deniers of non-iron alum. The carmine precipitates from the separated fluid as a fine powder. After this first precipitation, a second precipitate can still be obtained from the tin solution.

The obtained color is described also in “A Dictionary of Arts, Manufacturers, and Mines”, dated from 1853, as follows: “This matter has a very brilliant purple – red color; it adheres strongly to the sides of the vessels”.

In the eighteenth century, Mexican landscapes, where cochineal was bred, looked like in the engraving of Michael van der Gucht that we used at the beginning: fields of cacti with busy farmers to take care and gather the precious insects.

Even before Hernán Cortés and the conquistadores’ arrival, probably already in 2000 B.C., cochineal was used as a pigment by the populations in Southern Mexico, to dye fabrics and also as a medicinal product, according to the Mexican textile expert Quetzalina Sanchez.

Further testimonies of its usage throughout the history come from Incas and their traditions. Red color had a key role during religious rituals. Indeed, the long red vestments of the indigenous people symbolize their power and their command, a link with the history of their ancestors and the creation process.

Likewise, the Aztecs used cochineal, calling it nochezli, especially to dye fabrics, which was named after the city Nochisttan “the place where there is a lot of cochineal”.

In the first half of the 1500s, the red color obtained from cochineal arrived in Europe and new methods were immediately developed to optimize its production: in the sixteenth century, it was used by most of the painters such as Rubens, Caravaggio, Gauguin, Renoir and van Gogh. Few years ago, the use of cochineal carmine was also confirmed in the painting “Bedroom in Arles” which van Gogh painted in three versions between 1888 and 1889. Today, looking at his piece of art, we just see the blue walls of the room. However, thanks to some analyses by a group of scientists from the Art Institute of Chicago, we can hypothesize that, originally, the walls were purples, which was obtained by mixing cobalt blue with carmine red.

Cochineal keeps always surprising us, an intense and vibrant pigment, with its history full of traditions. In Europe, it revolutionized the concept of “red” in the art history, while in Mexico, as the Mexican textile expert Quetzalina Sanchez reminds us, “it continues to be associated with ancestral magic [and] protects those who wear attire dyed with cochineal”.